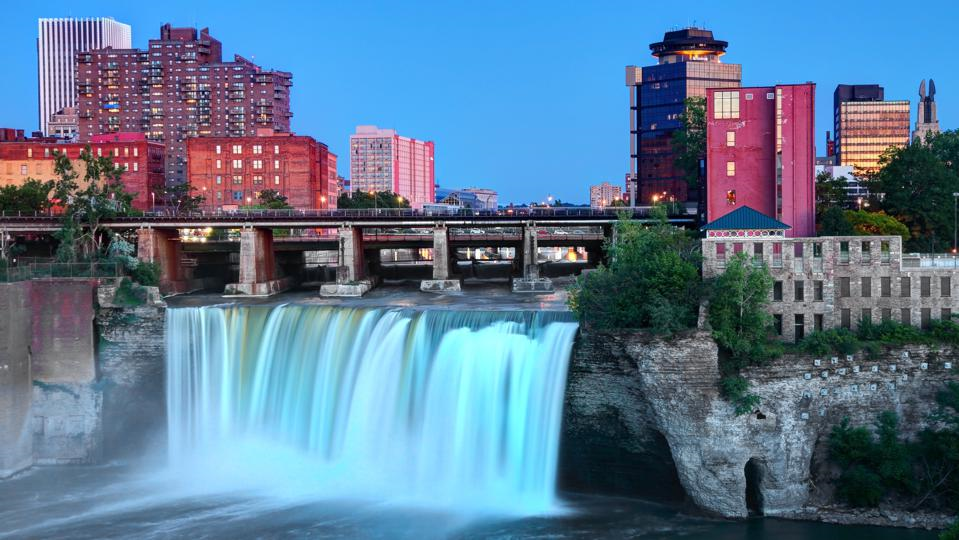 One of the main reasons people buy a home is to build wealth. The common line is: “Why pay someone else’s mortgage and contribute to their equity (via rent) when you can spend the same amount of money or less and reap the rewards?”

But, if you’re in a pricey area, that wealth can quickly get eaten up by a mortgage that resembles a tapeworm—constantly sucking up funds as your bank account shrinks. This is what’s bluntly referred to as being “house poor.”

If you live in an expensive metro, you can eschew the tiny house with a huge price tag and move to greener—and cheaper—pastures. After all, cheaper doesn’t necessarily mean worse.

We looked at 100 metro areas with a population of at least 100,000 to identify the top 10 most affordable cities for homebuyers. We looked at several factors to gauge affordability, including the median income of that city, average home costs and median real estate taxes.

“When I saw the list, I smiled. It’s a perfect example of undervalued markets,” says George Ratiu, senior economist with Realtor.com. “These are not boom-and-bust cities, they have long-term economic growth potential.”

The Motor City tops the list of most affordable places to buy a home. Despite the median salary being among the lowest of the affordable cities on this list, so are home prices. In fact, median earners in Detroit will spend just about 6% of their monthly income on mortgage payments, which is extremely low.

Although Detroit has suffered major blows over the years—a failing car industry, racism-fueled out-migration to the suburbs and blighted neighborhoods caused by the Great Recession—Detroit has been on the upswing for the last few years.

Major companies like General Motors, Ally Financial and Quicken Loans are headquartered in Detroit. Big tech also has a presence there, including Microsoft, Google and LinkedIn. And most recently, Apple announced it would partner with Michigan State University and open its first North American developer academy in Detroit.

“Detroit and the surrounding areas have always been an amazing place to live, work and play. Belle Isle Park was designed by the same group that designed Central Park in New York City,” says Randolph Barker, president of the Detroit Association of Realtors. “Our food offerings are diverse and reflect the blended culture of the city. Some of the best things I have ever eaten can be found in Mexicantown, Greektown, Midtown, Corktown and Downtown.”

Cleveland is not only an affordable city, but it’s a young one, too; the median age is around 36, which is just under the national median. What makes Cleveland special is its liveliness. Situated on Lake Erie, people there enjoy water sports and boat parties.

It’s not just fun and games, however, as the economy in Cleveland is solid and growing. A new public-private partnership between the state of Ohio, three hospitals and two universities, known as the Cleveland Innovation District, is projected to create 20,000 jobs in the next decade.

“Cleveland was not as impacted by the recession caused by the pandemic as the rest of the country,” says Dena Cipriano, senior manager, communications and media relations at the Greater Cleveland Partnership. “The Cleveland metro has a lower unemployment rate than the country as a whole. And we have the second highest growth in the inflow of technology workers of any major metro area during the pandemic.”

Geographically, Toledo is in a prime location. Located on the Western end of Lake Erie, it’s a one-hour drive to Detroit, a two-hour drive to Cleveland and about four hours to Chicago.

Although Toledo has struggled with a depressed economy since the 1980s, in recent years the rust belt city has made strides toward a better future.

According to a report by the Federal Reserve Bank of Cleveland, Toledo saw the most employment growth in construction (6.4% between March 2018 and 2019). Additionally, employment in the financial activities sector also saw positive momentum, as it “grew faster in the metro area (at 1.4%) than it did in Ohio (0.6%) and in the United States (1.3%),” according to the report.

Home to Bowling Green University and the University of Toledo, there are almost three dozen universities and higher learning institutions situated within 60 miles of Toledo, which is an impressive concentration of potentially high-skilled workers.

Memphis is home to about 650,000 people, and the median age is around 34. In fact, this Mississippi Delta city might be primed for a tech surge.

Anthony Young, capital executive in residence at Epicenter, a non-profit designed to support entrepreneurship in the greater Memphis area, recently told the publication AfroTech that Memphis is outpacing other metropolitan cities in terms of Black-owned businesses accessing venture capital. In the Memphis area, some 16% “of early-stage companies accessing VC have a Black founder (it’s about 1% nationwide), and 13% of invested startup capital has gone to companies with a Black founder.”

“Memphis is investable. Memphis outperforms our national peers in capital investments, specifically as we dig into the percentage of Black-led companies gaining access to capital and the fund’s percentage of dollars invested into Black tech startups,” Young says.

Along with a growing tech scene, FedEx, the Tennessee state government and the U.S. government make up the three largest employers in the region. Memphis also saw a 9.88% increase in per capita income from 2018 to 2019, according to data from the Federal Reserve.

And let’s not forget Memphis’ artistic roots, which rival any city. It’s practically synonymous with music—blues, rock n’ roll and Elvis (this is where Graceland is located). It’s no wonder Memphis has been called “the cradle of American music.”

Baltimore is home to high-profile employers, including John Hopkins University and Northrop Grumman, one of the world’s largest weapons manufacturers and military technology providers. The government is also a big player in Baltimore’s economy, with more than 18% of workers employed by the federal (145,695), state (99,127) or local (245,253) government.

It’s also in a great location, conveniently located less than an hour from Washington, D.C. Using the MARC Penn line from Penn Station, Baltimore residents are able to work in the much more expensive D.C. without paying high D.C. home prices—in just about eight train stops.

One Redditor had this to say about commuting between Baltimore and D.C.:

“I’ve been commuting from Baltimore to D.C. (Dupont Circle, oddly enough) for 8+ years. Pros: You get to live in Baltimore, it’s cheaper than living in D.C., it can be relaxing when working properly. Cons: Huge time suck, but if you get your schedule downright it can be worth it. I would say, give it a try for a few months and see if you can cope.”

Rochester made our list of most affordable cities—but it could be poised to become slightly less affordable in the future. According to a recent report by real estate analytics firm ATTOM Data Solutions, Rochester was among the metro areas (with a population of at least 1 million in 2020) that saw the biggest leaps in return on investment (ROI) for sellers in the country, up by 49.9%.

It’s also been on the radar of many housing experts as people leave Manhattan for more space and lower housing costs.

“Rochester made our list of top housing markets from 2019,” Ratiu of Realtor.com says. “You see a lot of spillover from New York City. A lot of people move to New York to start careers in their mid-20s, 10 years later they’re struggling to find affordable housing, so they move to places like Rochester.”

The University of Rochester and its medical center, with 32,000 employees, is the city’s largest employer.

Located on the western side of Lake Michigan, Milwaukee is probably best known for its beer-making heritage. In fact, Milwaukee was home to breweries before it actually became a city. Some of the oldest American beer makers come from Milwaukee, including Schlitz, Pabst and Miller. Even the city’s baseball team—the Brewers—pays tribute to its roots.

Milwaukee still has a lively beer scene (there are more than 30 breweries in the area), but these days it’s health care that dominates the economy. With nearly 600,000 residents, the top three employers in Milwaukee are all in the health sector: Aurora Health Care (25,900 employees), Ascension Wisconsin (15,500) and Froedtert Health (10,900).

Milwaukee has become an attractive destination for people fleeing more expensive metro areas, including Chicago, according to data from Apartment List. Just over 90 miles north of the Windy City, Milwaukee median home listing prices are almost half as much as Chicago, which was $370,000 in 2020.

Montgomery Alabama offers the lowest median annual real estate taxes on this list, totaling about $512 per year. Not only is it a great place for low taxes, but Montgomery also offers promising career opportunities.

Montgomery may fly under the radar, says Ratiu, but that might be a mistake. “Broadly speaking, Alabama has a tremendous aerospace industry.”

Montgomery is home to the who’s who of aerospace companies, including Boeing, Northrop Grumman, the U.S. Department of Defense, Leidos, Raytheon and Lockheed Martin.

In fact, Lockheed Martin broke ground on a 225,000-square-foot facility in 2019. The last time the leading aerospace company invested in the area, in 2014, it delivered on its promise of bringing 224 full-time jobs in over five years.

The automotive industry is another big sector in Montgomery, with Hyundai expecting to add 200 jobs in 2021.

“What’s happening in Montgomery is emblematic of what’s happened in the last 15 years, smaller markets are poised for growth,” Ratiu says. “It is a place where a young family can earn a living, buy a home and build wealth.”

Buffalo has gone through a major transformation over the last decade, with new restaurants, entertainment, activities and events popping up year after year. This confluence of businesses and community activities has infused the city (known for its harsh winters) with lots of fun and energy, says Amber Wesser, real estate broker at Hunt Real Estate in Buffalo.

“For many years, people would think of New York and think of New York City, that just is not us,” Wesser says. “From a home sale price or rental price, we are drastically more affordable. Not to mention, we have the best food, of all sorts…but I may be biased.”

The largest city in upstate New York, Buffalo is about seven hours northwest of Manhattan, but, like Wesser says, it’s nothing like the Big Apple. Buffalo’s population is under 300,000 and, although it was once home to more millionaires per capita than anywhere else on Earth, today Buffalo is an affordable alternative to big city living.

According to data from Realtor.com, Buffalo’s median listing price for a single-family home in 2020 was just $184,000—considerably lower than the national median of around $340,000.

Some of the most affordable areas for first-time homebuyers are in the Midwest, and Kansas City is definitely an example of that. With median listing prices below $200,000, this could be a great area for buyers on a budget.

And if you happen to be in the healthcare field, even better. Health care is the top industry in Kansas City (not to be confused with Kansas City, Missouri).

Because of the location and amount of space, manufacturing and transportation also are major industries here.

Mid-size Metros Might Not Come With Glitz, But They Do Offer A Shot At Homeownership

Ratiu says that while many people focus on the bright stars, like New York or Washington, D.C., mid-sized cities are naively overlooked when it comes to getting both affordability and a strong economy.

Instead of forking over half (or more) of your paycheck on rent, people interested in homeownership can buy a house and have cash left over for retirement savings, the kids’ college funds or even just basic health insurance.

For some, that extra cash might help cross off some of those frame-worthy goals from their wish lists. (We see you, Bora Bora.) You can get all of this by moving to an area that simply costs less.

Of course, moving is not an inexpensive endeavor. And not everyone has the luxury to uproot their lives and plant themselves in a new place. But, as work-from-home flexibilities become more common, moving has become a more viable option.