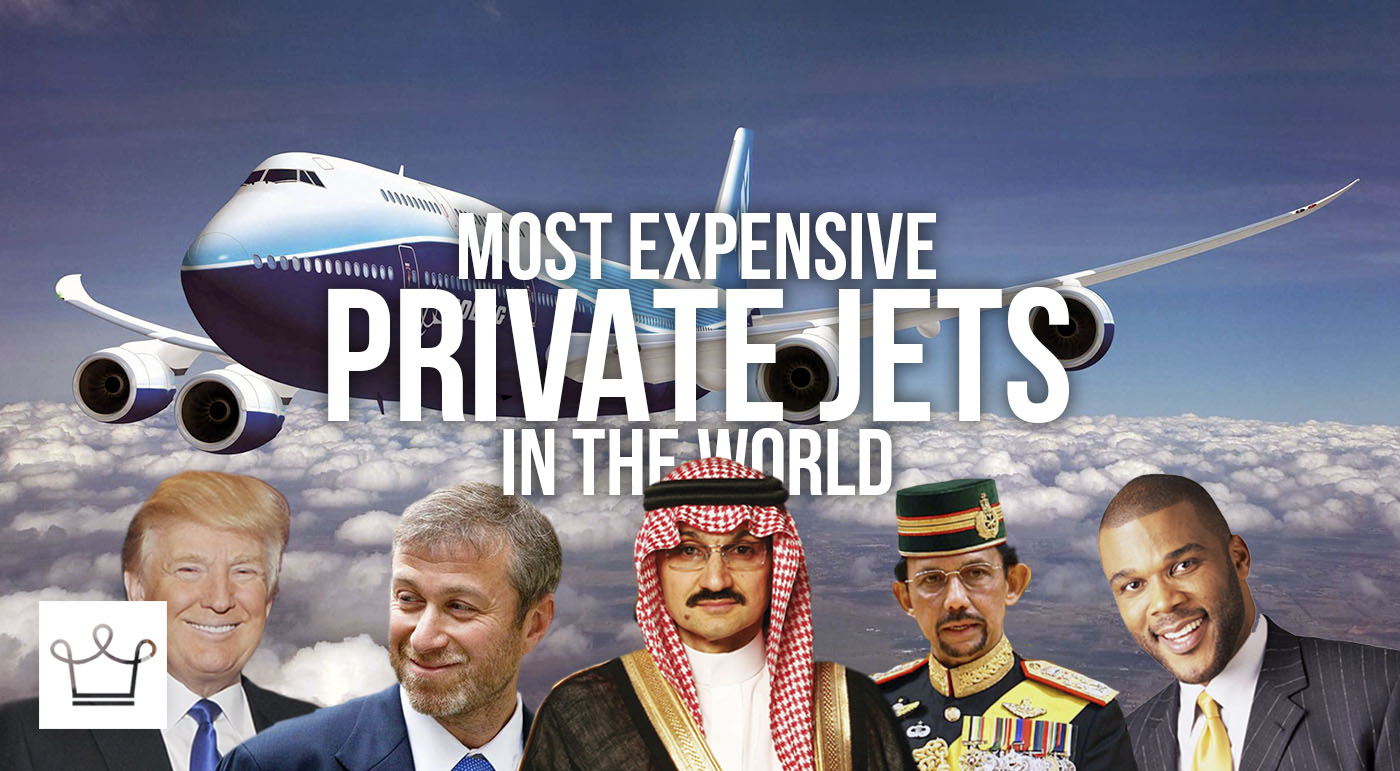 There is no doubt almost every rich personality in the world owns a private jet since it is seen as one of the easiest means of travel for the rich. No stories, no overcrowding and no delays. That is what private jets have to offer.

The comforts these private jets have to offer fairly do come with a high price depending on one’s worth since what might be expensive to one might be cheap to the other. I believe you agree with me on that.

For those who might be wondering how much you need to save in order to acquire a private jet for yourself, please it appears between $2 million and $100 million can get you one. I do believe that is not much for you but as for me, it appears I need to continue saving till maybe thy kingdom come.

Without wasting much time, let have a look at the 10 most expensive private jets and their owners;

I hope we all know Boeing. It is one company that has been in existence for over 50 years and a very well noted for building large passenger planes but it appears this is different for this Boeing 737.

It is valued at $80 million although the base price is only $57 million, the interior upgrades that have been implemented in order to make the experience so much better skyrocketed the price to around $80 million.

So what do you get for that kind of money?

For starters, it can carry up to 19 passengers with sleeping facilities for 8 people. Apart from the king-sized bed in the bedroom, the fully equipped kitchen, a complete bathroom including a shower and a fitting conference room, it also features state-of-the-art technology offering direct access to the internet and other communication devices via satellite.

The unfortunate thing here is the fact the real owner of this upgraded Boeing is unknown but it is believed to be owned by one businessman based in America. With time, it will certainly pop up.

Another private which cannot be taken off the radar when it comes to the world’s most private jets it certainly has to do with the Airbus A319 valued at over $80 million.

It boasts of superior interior design is custom-made to your demand. The base model accommodates 8 guests in what Airbus calls “unmatched comfort”.

It is believed the successful billionaire bought the used plane from Microsoft co-founder, Paul Allen, and since has been pouring money into several customizations in order to better fit his own style and enjoy the comfort he demands.

In the well-known Trump style, the interior features gold fittings across the board starting with the gold seat belts up to gold plated sink and faucets in the bathroom.

Apart from the master bedroom that by now is a must in any luxurious jet, Trump took opulence to another level by having installed a video room, including a home cinema system with a 52-inch flat-screen display.

American producer, actor and director – Tyler Perry, made sure that his private jet is a clear projection of himself.

He customized it to be a “Flying theater” with several big displays, a big library and everything else you need in order to enjoy your flight.

In order to create the right mood inside, Tyler ditched the boring window shades and installed a special type of glass so he can control the opacity in an electronic way.

The base price of a new Gulfstream III is around $65 so you can imagine just how much this private jet was modified.

All of that gear put his Gulfstream III on the 7th spot in our Top 10 Most Expensive Private Jets in the World Rank.

With a net worth of more than $17 billion, it is obvious the man Joseph Lau can do whatever he wants with his private jets. The Chinese billionaire owns one of the most expensive private jets in the world.

Despite its enormous price point, this VIP Boeing has created a big buzz worldwide with many of the world’s richest taking a look at it to see whether or not it fits their style.

The base model starts at $153 million but people with this kind of money don’t stop at this, working at it to making it the ultimate jewelry of the sky.

Named “Dreamliner”, most of the interior is handcrafted and by far the most shocking element is that inside this private jet there’s a spiral staircase taking you to one of the two decks.

Whoever has heard this name; Abrahimovich is certainly not a lover of English football. He is the owner of Chelsea Football Club and his take over in 2004 really became the talk of the town as he popped in lots and lots of money in his quest in making Chelsea one of the biggest clubs in the world.

It appears he isn’t only interested in Chelsea as it appears his private jet is seen as one of the most expensive jets in the world. It is valued at close to $150 million.

The plane has a 30-seat dining room onboard, along with full amenities, including a huge master bedroom.

Talk of luxury and you cannot take out the name Prince Talal from Saudi Arabia. He is certainly known for his love for luxury and that was something that got him on the wrong side of the crown prince of Saudi Arabia. He was recently arrested and held to be accountable.

But our attention today is to have a look at his private jet which is seen as one of the most expensive in the world valued at more than $200 million.

His specific Boeing 747 could originally carry up to 400 people, but the prince had other plans for it.

He stripped the entire interior out and had it custom-made from scratch to fit his particular view of what flying private should feel like.

If there is one billionaire who is noted for knowing how to really spend money, then it certainly has to do with the sultan of Brunei. He has more than 400 cars parked at his garage and not just ordinary cars but luxurious cars for that matter.

He was once the richest man in the world until the likes of Bill Gates and Elon came through but nothing seems to have changed with his worth as he continues to enjoy.

With his private jet, it is valued at close to $250 million. The jet is made up of a living room, a bedroom and a bathroom are all decorated with gold and crystal making one feel like he’s traveling inside a jewelry box.

The Sultan of Brunei specifically asked for the washbasins in all his bathrooms to be made out of solid gold, and what the sultan wants, the sultan gets. That is the reality on the ground.

Owned by the richest man in Russia, billionaire Alisher Usmanov, this is the second most expensive private jet in the world.

Just the base price of the Airbus A340-300 would be enough to make it rank second, costing $238 million, but as you’d expect a custom interior and state-of-the-art technology and security systems have been created specifically for this jet adding an extra 150-200 million.

Now there you have it. The world’s most expensive private jet is owned by no other person other than Prince Talal. His name has appeared twice on the list and so this certainly tells you how luxurious he is.

With an astronomic price tag of $500 million just for the base model, the sky is no longer the limit when it comes to luxury standards.