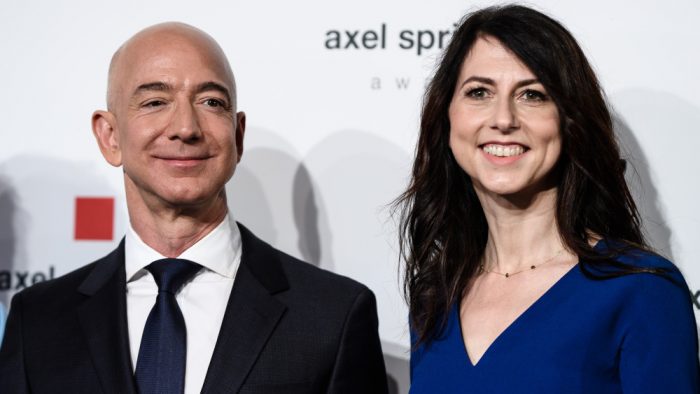 In most cases, a celebrity marriage doesn’t last very long. And when they do eventually get divorced, it tends to be a messy and expensive process.

Here are the 10 most expensive celebrity divorces of all time:

Considering Amazon founder and CEO Jeff Bezos was named the world’s richest man in June 2018, his 2019 divorce from his wife of 25 years was expensive.

Washington, where Bezos resides, is a community property state, which means that all assets and debts accrued during the marriage are considered owned equally by both spouses, unless there was a prenuptial agreement stating otherwise.

However, the former couple worked out terms privately, and in April 2019 announced they’d finalized their divorce, with Mackenzie walking away with around $36 billion — making her one of the richest women in the world. (By June 2020, she had already given $1.7 billion away to charity, and continues making large donations to non-profits nationwide.)

In 2013, media mogul Murdoch and his former wife, Anna (now Anna Murdoch Mann) divorced. After a marriage of 32 years and three children together, the couple split up in 1999. Under the settlement,  $1.7 billion of Rupert’s fortune (which included $110 million in cash) went to Anna.

A mere 17 days after the divorce was finalized, Rupert wed Wendi Deng, 38 years his junior, while Anna married investor William Mann several months later. Unfortunately for the new couple, this marriage also went into splitsville, a turn of events made public in June 2013. However, sources close to the situation say the couple had a prenup, so the most recent break-up may not be breaking any records.

One of the largest Hollywood divorce payouts ever was between Gibson and Moore, who finalized their divorceafter nearly 30 years of marriage in 2011 and split half of his $850 million fortune, with Moore’s settlement totaling $425 million.

The basketball superstar split from his wife of 17 years, Juanita, in 2006. It wasn’t the first time the two had considered ending their marriage: Juanita filed for divorce in 2002. She ended up receiving one of the biggest payouts in history, $168 million.

After 25 years of marriage, singer Neil Diamond and his then-wife Marcia split in 1996 after rumors of Neil’s infidelity prompted her to file for divorce. Although the official numbers were never made public, Diamond has been quoted as saying that his ex-wife received $150 million in the divorce.

The former owner and chairman of the Los Angeles Dodgers, Frank McCourt, made most of his money in the real estate development business, but was set to lose a healthy portion of it when it was announced that the couple was splitting after 30 years of marriage in 2009. In a messy divorce, McCourt fired wife Jamie as CEO of the Dodgers and as part of the divorce settlement, she relinquished her ownership stake in the team after receiving a $131 million settlement.

The settlement was reached in October 2011, several months after the Dodgers filed for Chapter 11 bankruptcy protection, which eventually required the team to be put up for sale. In March 2012, the Dodgers and the land surrounding the stadium sold to a group of investors for a record price of $2.15 billion. It was a surprise to most everyone in sports that the team would have such a high valuation, but since Jamie McCourt had relinquished her ownership stake, she was not eligible to benefit from the proceeds, leading The Wall Street Journal to pose the question: Jamie McCourt’s Share: Baseball’s Worst Deal?

Sandy Mahl was Garth Brooks’ high school sweetheart, and the couple married in 1986. Three daughters and 15 years later, the couple divorced, ending with Brooks providing Mahl with $125 million. Brooks went on to publicly admit that he immediately had feelings for his current wife, Trisha Yearwood, only 13 months after his marriage to Mahl. He and Yearwood have been married since 2005 and are regarded as a power couple in the genre of country music.

Tiger Woods and Elin Nordegren were some of the most high-profile couples in the world. But their marriage ended in disaster, with a $100 million divorce settlement.

While most of these divorces resulted in a hefty payout, there are a few exceptions. For example, Steven Spielberg and Amy Irving only had to pay $100 million between them, and Bruce Willis and Demi Moore’s divorce only cost $90 million. But on the whole, these divorces have cost celebrities a fortune – and unfortunately, there’s no indication that the trend is going to stop anytime soon.

Spielberg’s first marriage, to actress Irving, lasted just four years, but produced one of the largest settlements in Hollywood, reported to be as much as $100 million.

Another high-profile celebrity divorce was Ford’s split with ex-wife Mathison in 2004. The divorce came after 21 years of marriage, and Mathison walked away with a large chunk of Ford’s earnings after their settlement — $85 million, according to Forbes.

Length of Marriage: 16 years
Children: Three
Filed for Divorce: 1994
Amount of Settlement: $80 million
The Skinny: Kevin Costner was still a college student and Delta Chi fraternity member when he met and married fellow student Cindy Silva in 1978. Costner, who had a few small movies roles to his credit, took a job as a marketing executive after college, while taking acting classes at night.

After breaking big with movies such as Field of Dreams and Bull Durham, and winning a Best Director Oscar in 1991 for Dances with Wolves, Costner was pulling down serious paychecks, earning $51 million dollars in 1991 alone.

You could argue Silva got out just in time — when the marriage dissolved in 1994, she was awarded $80 million, while Costner went on to star in a series of big budget dissapointments, including the infamous Waterworld and The Postman, sending his career into a steady decline from which it has never recovered.
With All That Money You Could Buy: 15,102 acres of prime Iowa farmland on which to build it, in hopes that they will come

Their 2008 split was an intense one, and ultimately, it was reported that Madonna paid Ritchie between $76 million to $92 million. However, the drama between the two was only beginning: more recently, they were involved in a bitter custody battle over their son, Rocco.

Kenny Rogers is remembered as one of the most influential music artists of all time. He was best known for his work as a singer and songwriter, blending multiple genres of music and easily becoming one of the best crossover artists ever. He has sold millions of records worldwide and was also talented as an actor, record producer, and entrepreneur. He also had a love for photography and penned a few books, giving him status as an author, too.

Although Rogers passed away in March 2020, his legacy still lives on, and many people are still interested in learning more about his past life and career. In his personal life, Rogers was married five times and had five children. His marriage to his fourth wife, Marianne Gordon, resulted in a hefty divorce settlement, totaling $60 million.

Length of Marriage: 18 months
Children: One
Filed for Divorce: 1999
Amount of Settlement: $50 million
The Skinny: James Cameron and Linda Hamilton had a long working relationship, beginning with the original Terminatormovie in 1984. While shooting the sequel, Terminator 2: Judgment Day in 1991, a romance developed between the two, though Cameron was married at the time to Kathryn Bigelow. In 1993, Hamilton gave birth to Cameron’s daughter.

Despite the child, the two had an on-again, off-again relationship for the next four years. However, while Cameron was shooting Titanic, the two decided to to marry in 1997. The marriage ended when Hamilton discovered an affair between Cameron and Titanic actress Suzy Amis. Cameron, who made $100 million for directing Titanic alone, was ordered to pay $50 million in a divorce settlement.
With All That Money You Could Buy: 8,333 full-size Terminator robot replicas

While not as pricey as the Jordan divorce, the Beatles star’s split from now ex-wife Mills is still one of the most expensive celebrity divorces ever: McCartney forked over nearly $50 million, and later called his marriage to Mills his biggest regret of the decade.