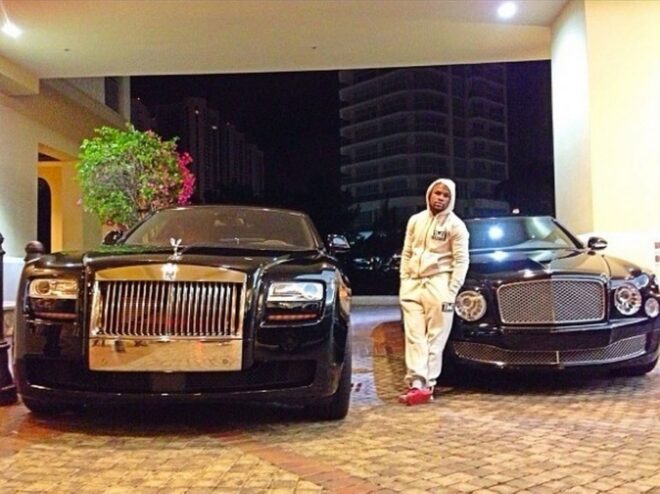 Floyd Monneyman Mayweather is seen as one of the richest sportsmen in the world. His enviable boxing record is something that will go a very way before it can be broken. He holds the record of 50-0. Meaning out of his 50 fights, he hasn’t lost or drawn any match. Many thought Pacquaio would have ended his record during their 2015 boxing match which generated more than $600 million in revenue but Mayweather still stood his ground winning the match via 118-110, 116-112, and 116-112 on the scoreboard.

Floyd Mayweather is one individual who is indeed obsessed with money hence earning him the nickname “Money”. He is therefore very well referred to as Money Mayweather. His fights mostly earned him millions of dollars with his last fight against Canelo Alvarez earning him more than 40 million dollars.

With all these under his sleeves, there is no doubt he can really some of the luxuries the world has to offer. He is known for really spending extravagantly.

Mayweather only wears shoes once and leaves them in hotel rooms for the staff. This proves the reason why he travels around a lot with his lovely sneakers in newer boxes. Another interesting thing that might surprise you is the fact the Money Man is believed to be spending more than $6,500 per year only on his boxers. Just like his shoes, he simply doesn’t repeat them as well.

Now let us have a look at some of the cars Floyd Mayweather drives and have in his garage. Aside from having more than $6 million in watch collection collections, his taste for luxury cars can’t be overemphasized.

These are some of the luxury cars he owns;

The Buggati Grand Sport Vitesse is a roadster version of the Veyron super sports car from Buggati. The Bugatti Grand Sport Vitesse is a record-breaking superfast car that had hit a maximum speed of 400km/h in 2013, setting a record as the world’s fasted roadster car. It also owes gratitude to the 1200 hp 8.0L W16 engine, which can accelerate the car from 0 to 100 km / h in lightning-speed of 2.6 seconds. These are some of the qualities of the Bugatti Vitesse and with a price tag of two million dollars, that is the most expensive in the collections of luxury cars of Mayweather.

Like every car in the Floyd Mayweather car collections , the Lambo Aventador  is also in black color. The base price for the Lamborghini Aventador is $ 500,000, but we’re sure the boxer added accessories to the supercar, which certainly cost more than a million. The car reaches a top speed of 350 km / h and can accelerate from 0 to 100 km / h in 2.9 seconds. The coupe version has a 6.5-liter V12 engine with 690 hp.

The superstar wants a supercar, so Mayweather invested $ 250,000 in the Ferrari 458 Italia. The car will get a V8 engine inherited from the Maserati family that will allow the car to reach the top speed of 328 km / h. But you also have to pay around 234,000 US dollars for a basic model from Italia. The car was designed and engineered with aerodynamic efficiency in mind while still maintaining a sleek look.

Ferrari Enzo is a rare vehicle made by Ferrari so it is now a collector’s item. Floyd splashed $ 320, 000 in 2004 to add this collector’s item to his collection. There are a total of 400 units of  Enzos in the world and Mayweather is fortunate to possess one of them. The Superfast car accelerates from 0 to 100 km / h in just 3.14 seconds and reaches a top speed of 350 km / h.

One car that has everything you could want in a luxury car is the Bentley Flying Spur. A British product made for luxury, the Bentley Flying Spur is designed to ensure a smooth and refined driving experience. The Flying Spur has a 6.0 liter W12 supercharged engine with 616 hp. The car accelerates from 0 to 100 km / h in 4.3 seconds and reaches a top speed of 320 km / h

The Mercedes-Benz SLS AMG is a limited edition of its kind. It is a 2-seater luxury super sports car that was initially manufactured in-house by the production unit of AMG. The SLS AMG GT has the power and ability to compete for the best from Ferrari, Aston Martin and Bentley. With a start up  price of more than  $200,000, getting started isn’t cheap.

The Mercedes SLR McLaren is probably the best car ever produced, and Mayweather knows that fact. Mercedes decided to work with McLaren to produce a street car that could bring racing skills to the road. The car was produced from 2003 to 2010 and in 2011 the special edition was introduced, which was limited to 25 units. Being one of the owners of  SLR McLaren, Floyd Mayweather was able to purchase the luxury ride in orange color.

Another expensive ride among Floyd Mayweather cars is the McLaren 650S Spider. The rare interior makes use of racing technology to give it an exquisite premium feel that strikes a balance between luxury and excitement. The price starts at $ 50,000 for the variant he possesses. The car is designed with a 3.8L 8cyl turbo engine.

Now let shift our attention to some of the houses Mayweather owns. The man owns lots and lots of luxury houses with his Miami home alone to be $18 million.

He is believed to have built this house in 2018 in Las Vegas and it cost him 7.8 million ounds.

The house has 11 bedrooms.