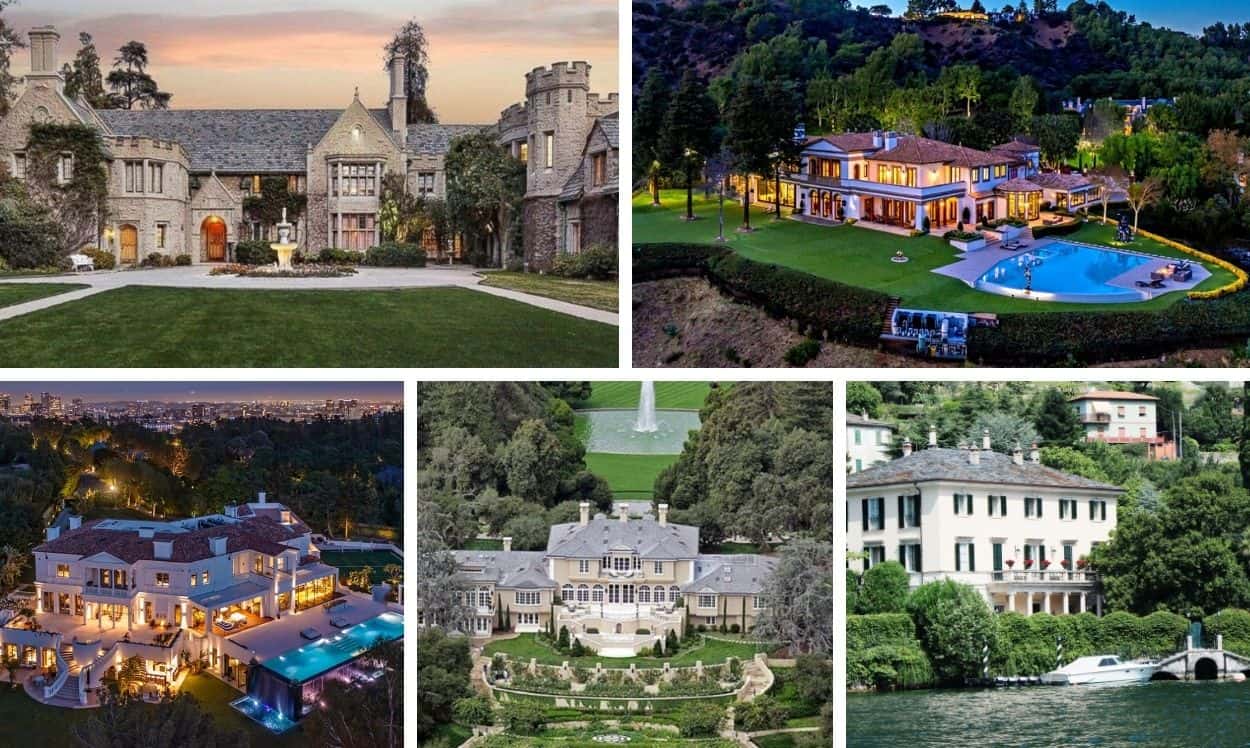 Today at worldcelebz.com, we intend to have a look at the 10 most expensive celebrity homes in the world. Being a celebrity isn’t easy as it seems as privacy is something that is seen as a luxury by most celebrities.

Someone like Mark Zuckerberg had to buy his neighbor’s houses all in the name of privacy. Therefore most celebrities tend to spend a lot of money when it comes to their homes as such homes are mostly located in luxurious communities. We are therefore going to have a look at the 10 most expensive celebrities’ homes in the world. Which celebrity do you think has the most expensive home?

The man who was paid was paid $21,429 per word for his role in Terminator 2: Judgement Day is on the list for having the tenth most expensive house as a celebrity in the world. His Brentford compound cost a whopping $23 million.

On the list for owning one of the most expensive houses in the world when it comes to celebrities is Jennifer Lopez. Her Bel Air house is estimated to be valued around $28 million. This is an estate that has been in existence since 1940 and was built by one Samuel Marx.

What makes the Bel Air estate unique is that there is a manmade swimming pool, an amphitheatre in the lawn, and many lavish rooms which fuse modernist colours with classic styles. Its back garden is an exotic paradise of greenery and small outdoor retreats, perfect for entertaining.

Brinkley’s mansion is on the list as well and this is a house which valued at $30 million. It boasts of a studio and many other luxuries.

If you’re the founder of Facebook and one of the richest men in the world, what more will you expect other than living in a beautiful home and great environment. To secure his privacy the more, he bought 3 of his neighbours’ houses for close to $30 million.

His main home is still gorgeous though, with 17,000+ square feet of grounds, a beautiful pool and spacious, minimal rooms. Therefore the list wouldn’t be complete without his homes.

Jerry Seinfeld’s Hamptons retreat is on the list as well and his house is valued at more than $30 million. Despite it being gargantuan and having its own baseball field, Jerry and his wife still insisted on describing their home as ‘laid back’ in a piece for In Style magazine in 2013.

It is believed Brad and Angelina bought this beautiful home in Verona, Italy, as a holiday home in 2010.Its 18,000 square feet, 15 bedrooms, cinema and two swimming pools.

12 bedrooms, 21 bathrooms, and 20,0000 square feet – the Mansion was built in 1927 in an English Manor style in the Holmby Hills area of California. Inside is everything you could ever wish for, a wine cellar, tennis court, gym, catering kitchen, and it even has a zoo license.

It cost a whopping $54 million but it has recently been listed for sale at a huge price of $200 million but on condition that the buyer must still harbour the old Hugh till he dies. He is no more now and so I think the buyer is free now.

Oprah Winfrey’s mansion is on the list as well. Her Santa Barbara Mansion is believed to be valued at $85 million. It is believed she reportedly spent the same amount she paid for the house on renovations, and each room is grand and traditional in its design. There are more fireplaces than bedrooms, an orchard, man made lake, a pool, and a guesthouse bigger than most people’s actual houses.

Bill Gates has named his Washington home Xanadu 2.0, and it’s taken him 7 years to be happy with it and its many renovations. It’s not quite at the top of the most expensive celebrity homes list though.

Gates bought the property for $2 million in 1988 and has transformed it over the years. It’s climate controlled, has its own personal beach, a 200-person ballroom, 24 bathrooms, a music system that you can hear while doing the front crawl in his pool and a whole room dedicated to trampolines.

Now the big question here is; who now keeps the house after the divorce?

The most expensive celebrity house in the world is that of Aaron Spelling’s gargantuan LA Manor house. It is valued at $150 million.The construction is the largest home in LA and was at one time the most expensive real estate listing in the whole US. It covers 4.6 acres, cost $12 million to build from scratch, and designed in a French chateau style.

Now there you have it, a look at the complete list of the 10 most expensive celebrity homes in the world. Which of them do you prefer to live in?